An Intro to Tekmar Controls

Getting the most out your hydronic heating system can be difficult. Luckily, Tekmar has a device that can increase efficiency and streamline the system's operations effortlessly.

How's this possible you ask? The Tekmar 257 for instance, is a boiler control system - a maestro if you will, that ensures optimal performance by operating multiple boilers in symphony, conducting the flow of water to ensure a harmonious distribution of heat.

Here, we will examine the benefits of each Tekmar 257, 356, and 664 hydronic heating controllers. 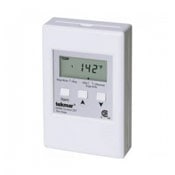 The Tekmar 257 features two stage control. This means the 257 can operate the attached boiler in either a "low" or "high" gear. The thermostat communicates with the 257, and if temperatures in a room drop below the set point too quickly or for too prolonged a time, the 257 can shift into high gear.

This two stage operation allows the system to provide more even heat with a quicker heat-up time. The Tekmar 257 two stage control also lessens the cold pockets often found within rooms. And just as each coin has two sides, if the system should require less heatsay in the warmer fall monthsthe Tekmar 257 can keep operation in the low stage to conserve energy.

Boiler Rotation
The Tekmar 257 also boasts equal runtime rotation technology. As the 257 is often used to control groups of boilers, this runtime rotation measures the amount of time each boiler in the system has run.

If one boiler operates more than the other, the Tekmar 257 will power down the overused boiler and instead draw heat from the under-used boiler. This way both boilers in the system are likely to last longer and provide more efficient heat.

Ease of Use
The Tekmar 257 features a no-nonsense interface with an easy-to-read LCD screen and large buttons. The 257 is ideal for controlling hotel or apartment building boiler systems. The 257 can also tailor performance to combi systems which provide both heat and domestic hot water to ensure an ample supply of both.

Tekmar 356
Secret Sauce
One of the best features of 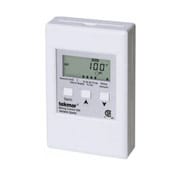 the Tekmar 356 Mixing Control unit is that it regulates mixing pumps in hydronic systems. This ability to fine tune the temperature at which a hydronic system runs allows a property owner to fine tune the comfort of their space. The Tekmar mixing control unit achieves its superior control over mixing pumps through an outdoor temperature reset sensor.

Built for the Average User
Like the 257, the Tekmar 356 is designed for simple use. A large screen and three simple to use buttons allow a homeowner or property owner to get maximum performance from their boiler without a PhD in hydronics. Once installed, the unit quickly sets up for simple use. Even the most basic controls on the 356 allow a homeowner to tailor a boiler to their personal tastes.

For intricate cases, the Tekmar 356's advanced controls provide all the finesse necessary. If these controls weren't already enough, the 356 also features a smart diagnostic routine which checks to ensure proper operation of each component in the system.

The ability to modulate boiler temperature with precision makes the 356 perfect for a wide range of heating applications including radiant systems and commercial baseboard heating. 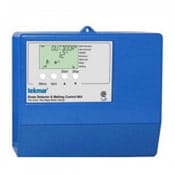 For those who live in the "rust belt", Tekmar offers the 664 snow detector/melting control unit equipped with temperature and moisture sensors that can operate snow melt equipment beneath two outdoor slab surfaces. When temperature drops below freezing with moisture in the air, the 664 then kicks on attached snow melt technologies.

This Tekmar melting control goes beyond simple on/off operation, though. The 664 truly is a snow melting control, able to direct two boilers into separate snow melting zones, each with differing temperatures. Take, for example, the owner of an office building. In winter, snow melt is needed in both the blacktop parking lot as well as the building's front steps. Installing a Tekmar 664 would allow the owner of this building to set different heat settings beneath these surfaces: a lower temperature beneath the heat-friendly blacktop and a higher temperature for the cold, concrete front steps. The 664 can also place priority of one zone above the other. So if the business owner wants the parking lot cleared before the steps, the 664 can direct heat to ensure that is exactly what happens.

The 664 can also control a variable speed mixing pump to make sure the hydronic fluid running throughout the snow melt system runs neither too hot nor too cold.

How to Pick the Perfect Radiator & Accessories