How to Pick the Perfect Mini Split Suspended Indoor Unit

A ceiling-suspended mini split is the perfect ductless solution for large open areas, such as those inside commercial, recreational, and educational facilities.

Unlike a wall-mounted unit, a ductless ceiling-suspended air conditioner is secured or suspended directly from a ceiling, as the name implies. These mini splits are capable of moving air over greater distances to condition larger spaces with fewer units.

When to Choose a Ceiling-Suspended Unit? 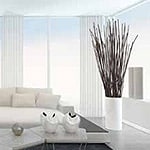 Ceiling suspended mini split units are perfect for those large, wide-open spaces where a wall-mounted unit would struggle.

Once installed, they can condition all areas evenly, keeping you comfortable no matter where in the room you are. Say goodbye to hot or cold spots.

They work great in: 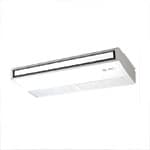 Ceiling suspended units can be secured directly to a ceiling or suspended from threaded rods. If you have other appliances installed on your ceiling that could block the air flow from your ceiling unit, you may need to suspend the unit. Just make sure it's at least eight feet above floor level.

Do not suspend them in the middle of the ceiling. Instead, they should be installed against an exterior wall for two main reasons:

Avoid installing these units near televisions, projectors, microwaves, or anything else that may give off electromagnetic interference. This will help ensure you have ideal communication between the remote and the unit when adjusting temperature or output.

Also avoid installing the unit in direct sunlight or anywhere near a heat source, which can interfere with the unit's ability to accurately measure indoor temperature and result in too much or too little output and an uncomfortable living space.

Some ceiling suspended mini splits offer universal mounting capability, allowing you to suspend them from a ceiling or mount it on the bottom of a wall. However, the universally mountable units are typically not capable of throwing air as far as units strictly designed for ceiling suspension.

Many units can be connected to a fresh air supply via a duct and fan. Not all units are capable of this, but if you wish to draw fresh air into your space, it's a great way to do so while keeping the indoor air conditioned.

Be sure to read our mini split accessories buyer's guide for more ways to supplement your ceiling suspended mini split.

How to Pick the Perfect Mini Split Ceiling Cassette Unit

An Intro to Towel Warmers