Over the last 20-30 years, there's been a focus on improving the efficiency of homes and the HVAC equipment that sustains them.

While the main focus has been on improvement of home insulation and sealing standards, the heating and cooling equipment inside the home also plays an important role in reducing costs and maximizing heat recovery.

Condensing boilers and furnaces have already been, and will continue to be, a critical part of an energy-efficient home.

Condensing is when a fuel-burning appliance takes extra energy that's created during combustion, increasing fuel efficiency. This process takes advantage of the chemistry of combustion and the physics of state change. 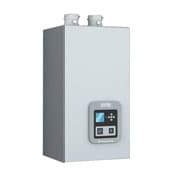 Natural gas is a common heating fuel that is primarily composed of methane. During the combustion process, this methane reacts with oxygen present in the air to produce heat, light, and a number of gasses. The two main gasses that result from this reaction are carbon dioxide and water vapor, which have a temperature of roughly 1400° F.

In a conventional boiler or furnace, these gasses will pass through a heat exchanger and release much of their heat. This heat is used to either heat air in a furnace or water in a boiler, and ultimately used to heat your home. This process results in efficiency of approximately 80-85% and exhaust temperatures of roughly 500° F.

The only way to increase efficiency further is to capture more of the heat before it leaves by decreasing the temperature of the flue gasses. Reducing flue temperatures to less than the boiling point of water will unlock substantial energy reserves. To understand why this is, we need to briefly talk about the physics of state change. 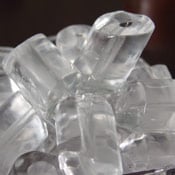 Materials commonly exist in one of three physical states: solid, liquid, or gas. Changing temperatures within these states requires a certain amount of energy called specific heat. Specific heat is the amount of energy required to increase 1 lb. of the material by one degree Fahrenheit.

Changing a material from one phase to another also requires energy (heat). This energy, called latent heat, can be quite substantial. Let’s go back to our pound of 212° F liquid water.

Although this water is at the boiling point, it requires additional energy to change from a liquid to a gaseous state. In the case of water, this latent heat is 970 BTU/lb. You can see that it takes almost seven times as much energy to convert a pound of 212° F liquid water into 212° F water vapor as it does to raise the temperature of that water from room temperature to the boiling point.

The reverse is also true. Converting 1 lb. of 212° F water vapor into 212° F liquid water will release 970 BTU, and this is where condensing becomes important to heating efficiency.

As mentioned before, one of the by-products of the combustion process is water vapor. In fact, each pound of natural gas burned results in the production of 1.55 pounds of water vapor. If we are able to cool this vapor and allow it to condense into liquid water, it will release an extra 1,500 BTU that would have been otherwise lost.

The total energy produced by burning 1 lb. of natural gas is approximately 20,000 BTU, so the energy recovered from the condensing process and the additional energy gained from reducing the temperature of the flue gasses will increase the efficiency of a boiler or furnace by approximately 10% compared to a conventional unit.

Hopefully, you now have a better understanding of how the condensing process works, and why it is important to energy efficiency and waste heat recovery. In the next article, we will talk about applications where a condensing boiler can offer significant cost savings, and also those where a conventional boiler might be a better option.

How to Pick the Perfect Radiator & Accessories